Aiming High and Caring for Everyone.

Enabling children to flourish and succeed

In 1870 the Foster Education Act was passed by parliament. Education became compulsory for all children until they passed certain ‘standards’ - but it was not free. The eldest child in a family paid 2d per week, subsequent children 1d. 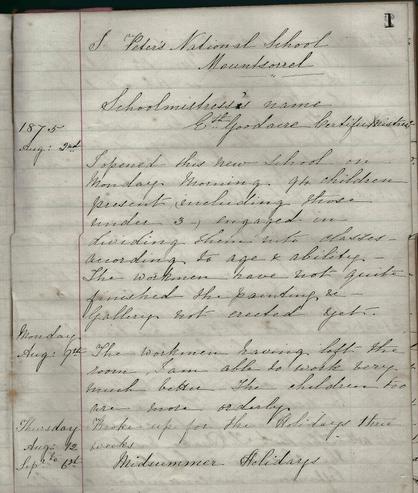 St Peter's National School, was opened on 2nd August 1875, under the direction of Headmistress Edith Goodacre.

"I opened this new school on Monday morning.

94 children present (including those under 3-),

Engaged in dividing them into classes - according to age and ability -

The workmen have not quite finished the painting and gallery not erected yet."

“Children could leave when they had completed certain ‘standards’. Some children left as early as nine years old.“

Each school has it’s own head and staff, teaching children from about 3 years until leaving school. Children could leave when they had completed certain ‘standards’. Some children left as early as nine years old. Payment for education continued until the early 1890’s.

When local government came into being, responsibility for education devolved to them and became free.

In 1919 after the First World War, because of the shortage of trained male staff, it was difficult to find a Headteacher for Christ Church. The school structure was revised. Christ Church took children from 4/5 years up to the end of the school year in which they were nine years old. They then moved onto St Peter’s until leaving school at 13/14 years. 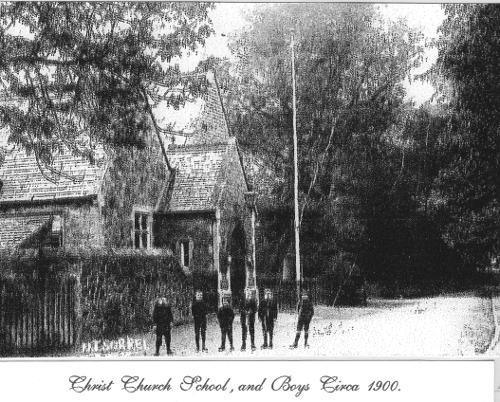 “After the Second World War the education system was changed nationally.”

After the Second World War the education system was changed nationally. The introduction of secondary modern schools meant children left school at 11 years, moving to Humphrey Perkins  (Barrow) and later also to Stonehill (Birstall). Children attended Christ Church until the end of the  school year they were 7 years old, then moved to St Peter’s until aged 11 years.

During the 1950’s a hall and kitchen were built at Christ Church as school dinners were provided on the  premises. Formerly children and staff from both Christ Church and St Peter’s had walked to the  Temperance Hall for lunch. St Peter’s children continued to use the Temperance Hall until 1960’s,  when new facilities were built for the junior school at the top field behind the infant school.

During the 1970’s both schools used the combined site—infants in the lower buildings, juniors in the upper school. A field separated the buildings. They had their own Head Teachers and functioned as separate units. In the late 1970’s Watling Street buildings were sold and all junior classes were taught on the one site at the top of the hill.

In the late 1970’s, on the retirement of Mrs Adkins the infant Head, the two schools were amalgamated to become ‘Christ Church & St Peter’s Church of England (Controlled) Primary School, Mountsorrel. (Possibly the longest school name in England?)

In 1990/91 a new extension joined the upper and lower buildings, providing new facilities. In the summer holidays, during the building work there was a fire in the lower school and for several months older infant children were taught at the Methodist Church in Church Hill Road.

Education is not static and there continues to be re-organisation and improvements made to the existing buildings. In the last few years cloakroom and toilet areas have been updated and a new computer suite has been built. New ’whiteboards’ installed in every classroom mean that most children can now access the ICT facilities. A covered way has been erected alongside the reception classes, enabling children to stay dry when moving between areas. There is no longer traffic through the classes, which improves their concentration and enhances their learning.

In September 2008 a SureStart Children’s Centre opened at the school, which enables closer co-operation between parents, the school and various agencies.

2009 saw the final January intake of children into the Foundation Stage and the school moved to one intake per year in September. The number of pupils in the school is constantly rises and 2009 saw 76 local children joining the school in September, considerably more than the 58 usually expected. An extensive internal refurbishment & restructuring with extra classroom space being created, was undertaken in the summer of 2009 to accommodate the additional children.

In January 2013 a fantastic state of the art block of 4 new classrooms were ready for occupation and are now a base for our Years 5 & 6. Adjoining classrooms have a moveable wall between them which can be opened to create a large space which is ideal for teaching the whole year group at once. Each classroom has its own outdoor learning space. There is a communal area in the centre of the building which houses a mini IT suite.

The Local Authority (LA) closed the SureStart Children's Centre in April 2019. The LA commissioned the school to open a Social, Emotional and Mental Health Resource Base. The old Children Centre building was remodelled and refurbished and 'The Nest' opened in September 2019. It can accommodate up to 10 children.

Unfortunately not the ones with chocolate chips.

Some cookies are necessary in order to make this website function correctly. These are set by default and whilst you can block or delete them by changing your browser settings, some functionality such as being able to log in to the website will not work if you do this. The necessary cookies set on this website are as follows:

Cookies that are not necessary to make the website work, but which enable additional functionality, can also be set. By default these cookies are disabled, but you can choose to enable them below: